skip to main | skip to sidebar

The Shock Influence on Shock!

The Shock! phenomenon currently holds several mysteries as to who thought up the idea of the film package at Screen Gems, who developed the marketing plan for it and the choices made during that time regarding catalog design and even the name of the package of Universal films the company was preparing for television sale. I believe I may have accidentally stumbled upon a couple of answers. The genius or geniuses behind Shock! are still unknown, but it appears that the 1946 film SHOCK, with Vincent Price and Lynn Bari, may have generated the idea for the title of the package AND a significant part of the design of the Shock! catalog.

Take a look at the cover of the Screen Gems catalog: 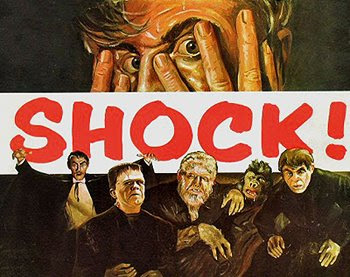 And then a poster for the SHOCK film: 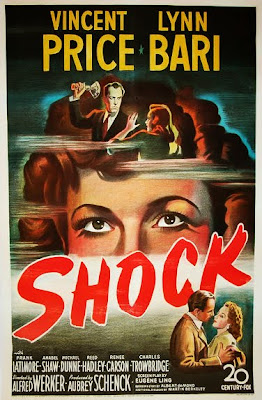 Clearly, the font selection for the Screen Gems' catalog mimics to a substantial degree the font and color of font that had been designed for the film's poster, as well as the prominent placement of the upper face of a person above the "Shock" title. It is not a long stretch to deduce that Screen Gems also borrowed the film's title as an effective, bold pronouncement for their own catalog of Universal horror and mystery films.
Posted by Mirek at 12:42 PM 9 comments:

SHOCK IT TO ME: GOLDEN GHOULS OF THE GOLDEN GATE

Published recently, Michael Monahan's SHOCK IT TO ME: GOLDEN GHOULS OF THE GOLDEN GATE is an important document on the SHOCK! phenomenon in San Francisco's Bay Area and its aftereffects. Even though I wasn't raised in that part of the country, I could feel the same excitement as one felt on the East Coast as I went through the book's 135 pages, reading about the horror show programming of the time and viewing the many TV ad mats, horror host photos, and copies of pertinent TV guide pages that illustrate this handsome paperbound volume.

In the Bay Area the first SHOCK! programming arrived with NIGHTMARE and the premiere of the 1931 FRANKENSTEIN on October 3, 1957. As in other parts of the country, this classic horror programming became a huge success among the younger crowd, in the Bay Area's case even causing wild monster-inspired disturbances at the UC Berkeley campus. NIGHTMARE lasted until October 1961, and it's interesting seeing the evolution of its programming through the years, from the original Screen Gems' SHOCK! package to films like THE BLACK SLEEP and PLAN 9 FROM OUTER SPACE.

Complete listings are given not only for NIGHTMARE, but the other horror film packages in the San Francisco area through the years, which were very similar to the types of programming that would run in varied areas of the country. So, for instance, we see the emergence of foreign horror films and Germany's krimis (mystery-crime films) into the viewing habits of growing monster kids, which for many such kids were the first, and very impressionable, samples of a cinema that was more askew, more deviant, than the type of classic horror cinema crafted by such studios as Universal.

Of course, a good portion of Monahan's book is taken up with the horror hosts of San Francisco, to include by-now such legendary figures as Asmodeus and Bob Wilkins.

If you have any interest in the SHOCK! phenomenon and its programming and horror hosts, you need to acquire and delight in Michael Monahan's book, which can be purchased here.
Posted by Mirek at 6:29 PM No comments:

In this SHOCK! catalog series, I will be skipping the individual film entries which follow page 8 (unnumbered in the original), placing, instead, each at the end of the corresponding SHOCK! film that may be reviewed on the blog.

So we then arrive at the last three pages of the unnumbered catalog.

Order forms for stills, ad mats, and balops. What's a balop, you ask? It's a slide or card bearing a picture or other visual material for projection in television. 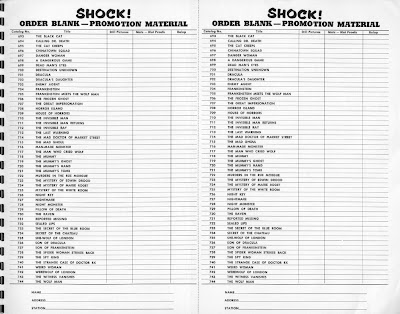 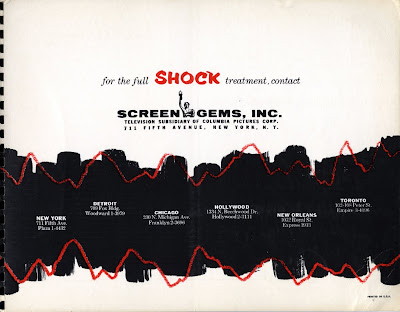 And we end with Frankie!... 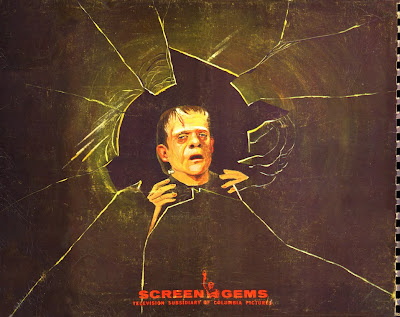 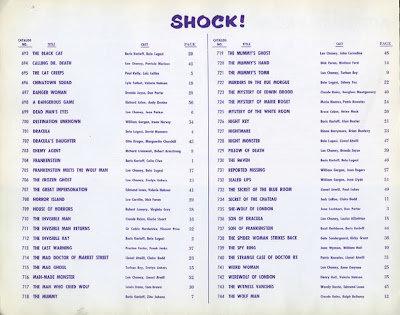 The next page of the SHOCK! catalog lists, in alphabetical order, the 52 films presented by Screen Gems to TV station. The catalog numbers run from 693 to 744. I wonder what came before and after?
Posted by Mirek at 6:52 PM No comments:

Audience Promotion to Excite Your Public (page 7; unnumbered in the original) 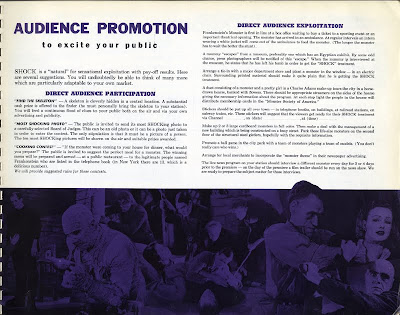 The next page in Screen Gems SHOCK! promotion book contains advice on "how to excite your public."

One direct audience participation gimmick is to consider what you would cook should a monster come to your house for dinner. (I'm sure we've hosted many a monster at a meal.) The public would be encouraged to send in their menus, from which a winning menu would be selected and then served at a restaurant to people in the city with the name of Frankenstein! According to the writer of the text, there were 13 Frankensteins in New York City at the time. I wonder what the number would have been in smaller cities?

An exploitation item has a "mummy" escaping from a museum that's having an Egyptian exhibit. When the mummy is interviewed by the pseudo-press, he states that he made his escape in order to get his "SHOCK treatment." Crazy mummy.

Another exploitation tactic mentions dressing up a woman in the style of a Charles Adams (sic) cartoon, clearly a reference to Charles Addams' main female character who would be named Morticia when THE ADDAMS FAMILY TV series was broadcast in the 1960s. The Morticia character was already iconic at the time. (Interestingly, Vampira, who took her look from the Addams character and who had been hosting horror films prior to SHOCK!, is not mentioned.) "Monster Society of America" membership cards would be handed out by this female character and the monster riding with her in a hearse.

Fun suggestions all. I wonder how many were actualized?
Posted by Mirek at 10:49 AM No comments: 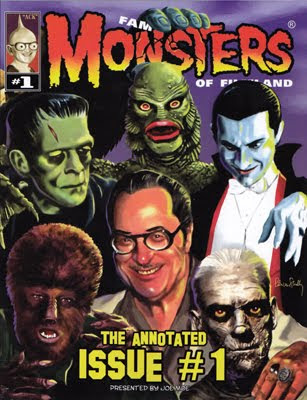 Of all the publications released by the current regime of FAMOUS MONSTERS (shorthanded as FM 3.0 and headed up by Philip Kim "Kong"), I was most looking forward to THE ANNOTATED ISSUE #1. My enthusiasm was slightly lessened when I learned that this publication would most likely contain a major chunk of what once had been published before, a special mock FM edition honoring the 90th birthday of Forrest "Forry" Ackerman, FM's legendary 1st and longest-standing editor. So it seemed to be a reprint, rather than the promised original publication per its promotion, but the original was rare nowadays and, when found, fetching high prices. I was still very eager to own and read this annotated edition, as it would surely, I thought, offer an invaluable look at the crafting of the first issue of the first monster magazine in the world that was published at the epicenter of the Shock Theater craze. After all, that's what the word "annotated" implies, something that digs deeper into the text being offered.

Unfortunately, the people who put this edition together do not know the meaning of "annotated." Annotated is not just reprinting some typescript of issue number one of FAMOUS MONSTERS OF FILMLAND. "Annotated" is offering editorial commentary at least--notes and research material that explain and expand upon the text being presented. There is no such commentary in this edition. It is not "annotated."

What we have, as the meat of the edition, is a simple photographic reprint of what we are told is the 1958 manuscript of the 1st issue of FM, interspersed with full-page photo illustrations, worked on a bit through Photoshop, so they don't look like the actual photographs being used. The vast majority of the manuscript is type-written, but there are some minor corrections in hand dispersed about, yet there's no way of knowing if these come from the hand of Ackerman or James Warren, the publisher of FM 1.0, a man as equally legendary as Ackerman and who rarely gets the credit he deserves in the making and success of FAMOUS MONSTERS. Nor do we know if a copy of a handwritten listing of contents with remarks on them comes from Ackerman or Warren, either. One assumes they come from Ackerman, but readers will be unfamiliar with Ackerman's handwriting to make a judgement. If one compares Forry's signature, which can be found in the publication, the answer may be that the markings come from Warren! (Warren is still alive and may have been able to resolve this very easily. In fact, it's a considerable lost opportunity that this publication does not have Warren making his own comments on the manuscript or at least offering up an introduction to the whole.)

So rather than providing a genuine annotated edition of issue 1, which would have been work and have taken some knowledge and intelligence to put together, we have a cheat. Something being sold as something it is not.

That said, there are a few perks to this softbound edition, which is admittedly handsomely designed and on glossy paper, with a nice wraparound illustration by Pete Von Sholly. The first 33 pages of the 160 pages is made up of a reprint of Ackerman's "Birth of a Notion," in which the first editor of FM goes through the history of the rise and making of the 1st issue. Forry wrote variations on this article several times, but it's impressively illustrated and quite readable. Two articles follow this one--"Following Forry" by Kevin Burns and "The House that Ack Built (and Re-Built)" by Joe Moe--and both are equally very well illustrated and engaging reads.

There are several typescripts after the manuscript proper that are the most interesting pieces of all. One, shows the editorial markings (or were they the publisher's markings?) on a Shock Theater press release from Screen Gems that was employed in FM #1 as original matter. A couple of other typescripts look of interest, but since there is no annotation regarding them, we are lost in suppositions as to where they may or may not fit into the history of FM 1. The one I got the biggest surprise from is something titled "TV Means Terrified Virgins." As you can see from the following sample sentences, it was definitely not meant for public consumption....

"The chips are down in TV, and so are the heroine's panties. It's the next step after strip-tease: pan-tease."

"One impatient televiewer's reaction was: 'I'd rather see a girl raped by a monster than watch a good five minute commercial.'"

Did Ackerman write this? If so, was it a way to let off steam from the task at hand? Was it sent around the FM "office", ie, to Warren? You won't know in the ANNOTATED edition that's being sold for $29.99. 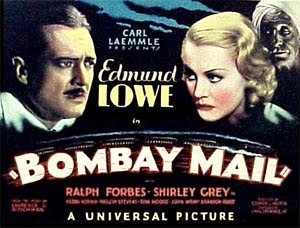 Here's an interesting curio, a film that would have fit perfectly into the SHOCK! or SON OF SHOCK! packages--and better than some other films that made it into those two lineups. It's BOMBAY MAIL, a Universal murder-mystery film from 1934, with Edmund "Chandu" Lowe. The music should be very familiar. The score by Heinz Roemheld was reused by Universal, most notably in the Flash Gordon serials. We'll call this part of the never released package of films from Screen Gems, their follow-up to SON OF SHOCK!: DAUGHTER OF SHOCK!